THE COVE CORELLAS, OUR LOVE TO HATE BIRD 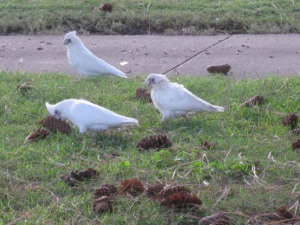 Figure 1. The two white birds on the left are Short-billed Corella the central bird is a Long-billed Corella. Seeds are extracted from the cone by both species. The seeds provide necessary calories and a number of minerals, vitamins, and other nutrients.

THE COVE CORELLAS, OUR LOVE TO HATE BIRD

Three corella forms exist for Australia; the Western form, as the name suggests, occurs in the southwest corner of the continent.  The remaining two forms, Short-billed and Long-billed corella are found just about everywhere else including our east coast. At times, it appears that Sanctuary Cove harbours the entire Australian population. On a day in February 2016, my best estimate was 10,000 plus birds that created the white-feathered blizzard primarily over the Pines GC. However, the population size can vary each year in Sanctuary Cove and elsewhere. Currently, in March/April the residing population of corellas is approximately 200 Little Corella with a sprinkling of Long-bills. We know they move but when, where and why needs answering before any strategies are developed to mitigate any economic losses.

The difference between these species is not apparent from a distance.  Only the close-up and friendly observer will note that one species conspicuously sports more salmon pink before the eyes, across the forehead, a slash across the chest and when they fly, there is a pinkish wash to the underwings.  For the Little Corella, the blue-grey spectacles on bare skin around the eye with very little to no pink in the feathers are the main feature for separation. The bill length is an obvious descriptor but who in their right mind wants to measure bill lengths without some degree of protection! Ouch!

The natural history of any animal is essential for developing an appreciation and understanding of how the animal functions and behaves.  For plants and animals, we call it natural history but it is no different from human history. Like humans, animals repeat their actions and activities, but unlike humans, animals can adapt and evolve to survive by increasing temporally and spatially their reproductive strategies while they search for food, water, and cover. The hardy generalist such as corellas accepts changes in the natural landscape, and very quickly learn to coexist with humans.  Sanctuary Cove corellas are an example of adaption.

Corellas are loud, numerous and destroy property but they provide some comic relieve with their “drunken” antics which may be best described as play. There is no evidence that birds of this species are intoxicated from the consumption of pine seeds although Bohemian Waxwings have been observed enjoying a fermented berry or two during warming spring weather in North America.  I have collected and eaten some pine seeds from the Pines with no apparent buzz. Perhaps, the consumption of a 50 kg bag of seed may have done the trick.

Thirty or so years ago, both species did not co-exist or inhabit the agricultural land now known as Sanctuary Cove.  Short-billed Corella spread eastward from west of the Divide, and the Long-billed Corella moved northward from the Melbourne-Adelaide region into the southeast Queensland.  Large-scale adverse weather patterns are known to move birds, as do changes to land use policies that encouraged both residential and agricultural development. Local aviary escapees are also a source for establishing a population in new areas.  Give any animal unlimited amounts of food, water, and cover, and in time, they will adapt and, they will flourish.

In Sanctuary Cove, the Pines GC provides an unlimited fresh water supply (ponds), nutritious food (fertilised greens with its subterranean invertebrates and pine seeds), dense cover (the Pines) for roosting, reduced predators, and adequate nearby night roosts sites.  Limited are cavity nest sites, during the breeding season, which may encourage the majority of the corellas to emigrate.  Not all remaining corellas will breed in the Sanctuary Cove area. Nest sites are limited, so a question might be what percentage of the Sanctuary Cove corellas breed in the area? If nest sites limit the reproductive capacity for corellas then what encourages the formation of large flocks to congregate in Sanctuary Cove?

If there is the need to reduce the numbers of the Cove’s corellas, perhaps it is time to consider the complete removal and replacement of the existing pine trees with a selection of pine varietals that produce a minimal cone crop. Green pine cones that are fell by gnawing, roosting corellas are mechanically removed to reduce the available cone litter. This method discourages ground feeding and increases competition for pine. Encouraging an understory of forbs, grasses, and shrubs to develop would also help to reduce corella populations in the Pines while enhancing the aesthetics of the golf course. If corellas cannot find their favourite food source, then hunger and intraspecific competition should force the majority to relocate.  Without doubt, the corellas will adapt in time by adjusting their numbers to a reduced food supply.

For such a widespread and abundant species there are many unanswered questions such as what do they eat, why do they chew rubber or plastic, is it because they lack adequate amounts of vitamins and minerals? What is the sex ratio of the Sanctuary Cove corella population? What percentage of the population is composed of Little Corellas, Long-billed Corellas? Where do they come from, where do they move two? Do both species of corellas behave differently, same? Where do the corellas breed? What is the age composition of the Sanctuary Cove corellas and so on? It is my hope next year we can start to answer some of the more straightforward questions when we initiate a Corella capture and wing tag project. Stay tuned!