The below article was published in AGCSA’s newsletter, The Cut on 2 August 2019 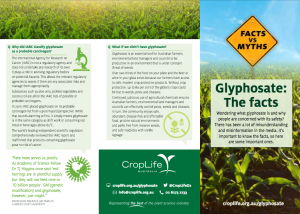 At this week’s VGCSA Country Meeting held at Yarrawonga Mulwala Golf Club Resort, discussion during one of the sessions turned to glyphosate, with one superintendent commenting he had been approached by a parent inquiring about use of the herbicide.

There has been a lot of media coverage surrounding glyphosate since the airing of the ABC’s Four Corners programme ‘The Monsanto Papers’ last October, as well as coverage of the two US trial verdicts. Locally there was significant media coverage given to Blacktown Council workers, who walked off the job for two days in June after refusing to use glyphosate, while a number of councils in Victoria and NSW have come out saying they are actively reviewing their herbicide usage and, in some cases, have stopped using Roundup. In June, a Victorian gardener became the first person in Australia to file a law suit claiming his cancer was as a result of exposure to Round-up.

Following the Four Corners programme, the AGCSA issued a statement regarding the usage of glyphosate which said: “The AGCSA will continue to be guided by the Australian Pesticides and Veterinary Medicines Authority (APVMA) as the national regulator for agricultural chemicals on the safe use of pesticides. Australian law requires appropriate warnings on product labels, which include relevant poisons scheduling, first aid and safety directions detailing personal protective equipment when handling and using products containing glyphosate. The AGCSA takes this opportunity to remind all users of the importance of reading the complete directions prior to opening any chemical container, ensuring all label instructions are followed for the safe handling and use of agricultural chemicals.” Click here to read the full statement as well as information relating to the APVMA’s investigation of glyphosate.

In a bid to dispel some of the hype and misinformation surrounding glyphosate and its usage, CropLife Australia has recently prepared a fact sheet (pictured above) which is a handy reference for superintendents and sports turf managers should they be questioned on the subject. CropLife Australia is the not-for-profit body which represents the developers, manufacturers, formulators and registrants of crop protection and ag-biotechnology products in Australia. Click here to download ‘Glyphosate: The Facts’ or visit the CropLife website.

Further to that, WeedSmart – the agriculture industry’s initiative to enhance on-farm practices and promote the long term sustainability of herbicide use – will be hosting a webinar “What is the state of play of Glyphosate?” on Wednesday 21 August. Professor Stephen Powles and CropLife Australia CEO Matthew Cossey will join WeedSmart and AHRI Western extension agronomist Pete Newman to give an overview of the current situation surrounding the world’s most used herbicide. While the webinar will be more focused on the agriculture side of things, it will nonetheless provide some valuable information pertaining to glyphosate and its use. Click here to register.