On Sunday 17th November 2019, a severe storm swept across South-East Queensland and caused substantial damage to Headland Golf Club. Golf Course Superintendent Ben Tilley gives us an insight into how the golf course was impacted by the storm. 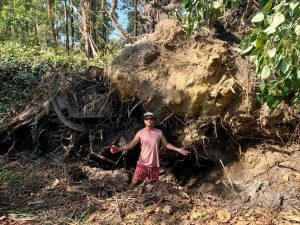 Ben Tilley has been the Golf Course Superintendent at Headland Golf Club for over 12 years yet nothing had prepared him for what hit the course and surrounding area mid-afternoon on Sunday 17th November 2019. 70 km per hour winds swept through the golf club causing damage far in excess of anything that Ben had ever witnessed before.

Concrete paths were lifted in sections of up to 5 metres, concrete mesh was bent and broken, there was branch spear damage to several greens and large trees were lifted and destroyed with one even leaving behind a 180cm crater from its root ball. Overall, 60-70 significant trees were lost with major structural damage to hundreds more across the 18 holes from the  super storm.

In the hours and days following the storm, Ben was blown away by the club’s members level of support. The morning following the storm, after a club email “Call To Arms” was sent out Sunday evening, there were 80 members onsite to volunteer with the clean-up efforts. Volunteer numbers continued to be in the 80s over the following 3 days with members offering their time to clear debris while others made food and others delivered snacks and water around the golf course. This generous donation of time and resources continued right through the clean-up process and Ben and his team could not be more grateful.

Ben’s priority quickly became safety and he held morning briefing sessions to all staff and volunteers. At the peak of the recovery, six chipping crews were onsite at any given time as well as three Elevated Work Platform (EWP) crews all working on the course together with  the volunteers and staff. Ben’s main focus during those hectic and mentally demanding first four days was making sure everyone working on the course remained safe at all times. (And it was an outcome that was successfully achieved)

Although the golf course maintenance facility, equipment and infrastructure was spared, two vehicles were trapped under fallen trees in the car park while three other cars had minor damage. 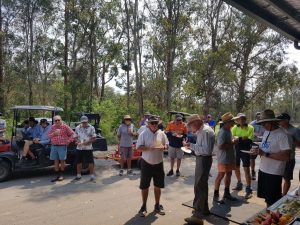 The course was closed until Friday 22nd November when the Back 9 holes were opened. The course went to 15 holes for the Saturday competition all the while chipping crews with EWPs worked on the remaining closed holes that day. It wasn’t until Thursday 28th November that  the full 18 holes were made safe and playable again.

Over the following weeks, Arborists continued removing and chipping remaining damaged trees. Headland Golf Club is still in the process of conducting a tree audit across the course to totally assess all damaged & dangerous trees and will formulate a management plan for immediate and future required tree maintenance work. 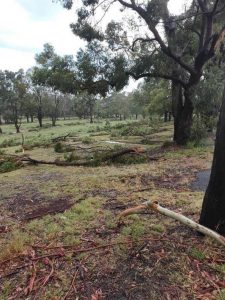 What did the club learn from this experience?

Since the storm, the club management in conjunction with the greens subcommittee has been working on a detailed disaster management plan.

The event confirmed that the culture in the club is very strong and the support that so many members offered at this time is simply amazing.