In May 2019, the team of irrigation installers arrived at Burleigh Golf Club for the 5-month project of completely overhauling the 30 plus year old irrigation system. The project included all new Polyethylene Main lines and Laterals, approximately 22km in total, and just over 700 Sprinkler heads for the 19 holes as well as on the driving range. The existing pumps were retained as they have been replaced in recent years, however the Main Control Panels were upgraded to achieve maximum efficiency of the new system. 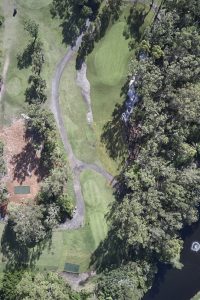 Preparation
In preparation for the new irrigation system, a new 19th hole was built. Construction of this par 3 began in December 2018 and took four months to construct. This hole was ready for play in April 2019 at the commencement of the Irrigation Installation.

Key Reasons for the New Irrigation
Prior to the new install, the 30 plus year old irrigation system was constantly throwing errors and having an average of 4-5 breakages per week. The irrigation technician was working on repairs and management of the system full time for several years.

By the end of 2018, the reduced flow of water via the system meant that the club was watering from sunset to sunrise, with this continual decline in the performance of the system, playable hours would have been impacted by the following summer. 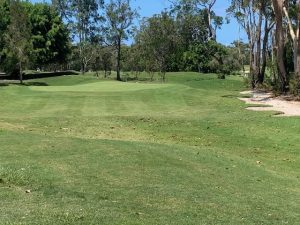 Challenges During the Installation
The challenges that were faced during the installation were absolutely minimal and it is firmly believed that the installers did a fantastic job throughout the entire process. The project ran to schedule and none of the three weeks that was allocated for contingency was required to get the job completed. In addition to the installers doing a great job, this is also attributed to the weather being on par, with zero days being lost for rain.

Benefits to the Course
The first major benefit to the club was the immediate reduction in the irrigation man hours for the ongoing repairs and servicing. The irrigation technician was immediately freed up to work hours as a greenkeeper improving the aesthetics of the course. It is estimated that this gave the course an additional 20 hours of greenkeeping labour per week.

The flow increased immediately and watering was reduced to just 7 hours a day for a full cycle which was a 4 hour per day reduction.

In the planning phase, the club was given the opportunity to reposition and add new sprinklers to boost coverage. This worked exceptionally well with the strategic placement of several new sprinklers throughout the course. The new system is run with quality, smart sprinklers that allow the greenkeepers to turn specific areas on and off based on need, applying extra water to dry areas and allowing micro management of turf in accordance with soil conditions. In short, every new sprinkler is individually controlled.

How did the Project Affect the Members?
Prior to commencing the project, it was agreed that the course would be returned to the original 18 holes every weekend for member play. This goal was achieved throughout the installation process. On occasion, there was minor clean-up works that were required on Monday or Tuesday, but in general members were happy to work around this.

This project was in the pipeline for over 3 years prior to the first trench being dug. Darryl raised his concerns regarding the decline of the existing irrigation system to the club’s board and worked with them throughout every step of the way for the best outcome for the course and members. 24 months prior to install, the club engaged industry specialists,(Design -Hydro Pumping David Hanby, Installation – Prolinks Mark Lawson/Total Eden) and finally collectively decided on Rainbird Heads and IC System for the project.

Darryl Edwards has been the Golf Course Superintendent at Burleigh Heads Golf Club for 11 years and believes that the ongoing support from his staff, management and board gives him all the tools to make Burleigh Golf Course the fantastic course that it is today.

Darryl welcomes any questions that anybody in the industry may have to be directed to him via email to super@burleighgolfclub.com.au