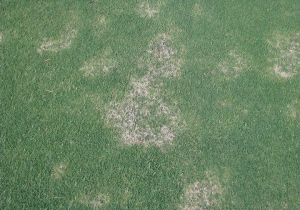 Late summer and autumn is the well-known time for applying Spring dead spot fungicides to prevent infestation of SDS the following Spring. Building a strong defense against SDS is now easier with the launch of VELISTA turf Fungicide from Syngenta.

The disease does not become active until temperatures are around 15 Degrees C in the winter time.  The issue with this is, that the couchgrass cannot compete with the fungal growth as the turf is dormant, and as we know the results can be catastrophic in the spring when the couchgrass breaks dormancy and attempts to reestablish itself as temperatures rise in the spring.

In order to maintain the couchgrass growth for as long as possible and to bring the couchgrass back after dormancy as quick as possible it is recommended that the surface be fertilized late in the season to maintain growth and to allow for carbohydrates to be stored in the plant over winter.  This storage then allows the turf to break dormancy when temperatures return to optimum, generally in the late spring. When adequate nutrition is applied in the late summer/ Autumn combined with an effective fungicide program, the levels of control is increased.

A successful preventative program is designed around providing as much active ingredient as possible into the plant. Hence a traditional program can often include up to 4 applications. A typical low-pressure program will include 3 applications (Table 1).

VELISTA contains a powerful new mode of action that is well suited for the prevention of SDS. VELISTA when washed into the root zone will move into the roots and lock into the root system offering long term protection. Importantly VELISTA does not have any growth retardant effects so will not slow down growth late in the summer season.